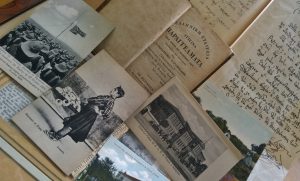 Graduate Program in Contemporary European and Greek History (CEGH) runs successfully since 1993, while many of its graduate students, and later holders of PHd Degrees, are currently employed as University teachers, researchers or as members of Cultural and Educational Institutions both in Greece and abroad. Scientific and research work of our graduate students, and published versions of their master and doctorate theses have been favorably greeted (welcomed) by colleagues. The Graduate Program CEGH and the Department in general have contributed to the development of novel academic experiences, later adopted by other graduate programs as well. The Annual Summer Meeting of Graduate Students in Modern and Contemporary History, addressed to students both from Greek and foreign universities, represents the oldest similar institution in the country, is held every summer since July 1995, and has offered to almost every young Greek historian the opportunity to present his/her work in public.

CEGH Graduate Program offers courses in history as a social science in connection with the other social sciences, both in the field of methodology and thematics. As part of an international network of scientific research, it aims at forming an interactive milieu of researchers and historians of high expertise, open to interdisciplinary approaches and familiar with critical scientific thought. Regular lectures of the Program are given by the teaching staff of Modern History Major Course, as well as by lecturers invited from other departments or academic and research institutions, such as the Institute of Mediterranean Studies (IMS) of ITR and the Neoehellenic Research Program of the NFR.

The University of Crete is a public academic institution, therefore enrollment in its Graduate Studies Program requires no fees. On the contrary special effort is taken to provide students with scholarships from public or private funds, as well as through collaboration with research institutions such as the IMS.  The University also proclaims annual awards for students who have excelled in their field.

CEGH University of Crete Graduate Program guides students into a deeper study of 19th and 20th century European and Greek societies, and familiarizes them with problems and methods of historical research and contemporary historiographical trends. It also aspires at preparing them with the eventual elaboration of a PHD thesis in Contemporary History.

Requirements and procedures of enrollment

Students having graduated from any Greek University Department of Humanities and Social Studies or any recognized foreign University  Department have the right to enroll in the CEGH Graduate Program, provided that they qualify in the entrance examination held by the Program teaching staff at the beginning of each academic semester. The examination includes a written and oral test, a foreign language test and an oral interview. Candidates are also required to submit a short research proposal, which is taken into account in the final grading. Each test is graded according to a scale of 0 to 10.

Entrance examinations intend to evaluate not only candidates’ general historical knowledge but also their ability to compose a written research proposal, the originality and adequacy of their answers and the method and pertinence of their arguments. Therefore the proposed study material should be regarded more as a study guide than as material for the examination.

The written proposal submitted along with the rest of required documentation does not define the subject of candidates’ future research. Candidates are required to bring up (broach) a research question, to expose the advantages and disadvantages of previous relevant research, and to present the bibliography, sources and methodology they propose to adopt in their approach. The above proposal permits the evaluation of each candidate’s ability to develop a pertinent research hypothesis, and to show his/her knowledge within a particular research field and its sources.

Students’ knowledge of foreign languages is also examined. Knowledge of the English language is compulsory, but they may also be tested in a second language. Foreign language degrees do not suffice to exempt candidates from the exam, which consists of translating 1-2 selected pages of a scientific text, permitting to test the candidates’ understanding and ability to state clearly the main argument of the text.

Regular attendance at CEGH Graduate Program lasts four (4) semesters, and may not be extended more than eight (8) semesters. Students can ask for a justified suspension of their studies for two semesters on the total, which are not counted in their overall studies. On the other hand, working students have the right, according to the internal regulation, to ask for enrollment as part-time students and to complete their studies in eight (8) semesters.

During their studies, graduate students of the Department should:

During the 4 semesters of their graduate studies, students should ensure a total of 120 ECTS Units (30 per semester).

Furthermore, graduate students are expected to participate as active members of the academic community in all scientific and research activities taking place in the department of History & Archeology, and the University of Crete in general .

A tutor is appointed for each graduate student, to advise and assist him/her throughout his/her studies.

Graduate students select the subject of their graduate thesis with the aid of a member of the Graduate Program teaching staff. Master thesis may, under certain conditions, be composed in a language other than Greek. It is intended to prove the candidate’s degree of familiarization with historiography and research methods, while its subject is particularly chosen in order to be easily covered in one or two semesters. The size and extent of the essay is fixed in agreement with the supervisor and the two other members of the jury, before which the student is expected to present his public thesis.