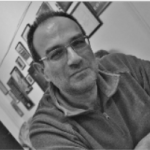 Paraskevas Matalas graduated from the Department of History and Archaeology, University of Athens. He received his MA from the Department of History and Archaeology, University of Crete. In December 2009 he completed his PhD dissertation, titled “Sparta: The History of a Landscape and the Landscape of History”). Between 2012 and 2015, he conducted post-doctoral research at the University of the Aegean and the École des Hautes Études en Sciences Sociales in Paris, titled: “From Paris to Athens: Routes of Nationalism in the Beginning of the 20th Century”. Since 2010 he participates in the “Amykles Research Project” His research interests include: intellectual history, history of nationalism in Greece and Europe, history of landscape and its representations, history of archeology.

Among his publications are:

Nation and Orthodoxy, adventures of a relationship: From the ‘Helladic’ to the Bulgarian schism, Herakleion: University of Crete Press, 2002 (in Greek).

Cosmopolitan nationalists: Maurice Barrès and his “disciples” around the world (currently being published by University of Crete Press – in Greek).