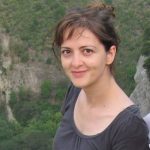 Katerina B. Korrè has a Philosophy and a Law degree from the Faculties of Philosophy and Law of the University of Athens/EKPA. She was a research fellow at the Hellenic Institute of Byzantine and Post-Byzantine Studies in Venice during the period 2007-2010. She attended Greek Paleography classes at the I.P.A./MIET. with prof. Ag. Tselikas and Latin Paleography with Prof. Konstantinos Ntokos. She has also received scholarships from the Academy of Athens, the Foundation for State Scholarships/IKY (2001-2004) and the Foundation for Education and European Culture (2010-2011 and 2019-2020, for post doctoral research). She supported her doctoral dissertation at the Department of History of the Ionian University in January 2018, on Mercenaries stradioti in Venice. Military and social function (15th-16th century) under the supervision of prof. N. Karapidakis.

Mrs. Korrè has taken part in research projects mainly focusing on the Greek presence in Venice. She has also participated in international conferences and has published sources and articles in scientific journals concerning the medieval history of the Greek regions; in particular, the Venetian possessions (Stato da Mar), phenomena of institutional syncretism which occurred during the late Byzantine or post-Byzantine periods, the individual action of social groups and the history of applied law during Venetian occupation.

She has taught Social and Economic History of the Middle Ages and Western Dominions in Greece as undergraduate courses at the Ionian University during the academic years 2018-2019 and 2019-2020. Also, Economic and Social History and Western Medieval and Byzantine Texts, in the Postgraduate Program History and Documentation (Course: Byzantium & Western Middle Ages) of the Ionian University (2018-2019) but has also given lectures in Medieval History, Codicology and Paleography in Italy.