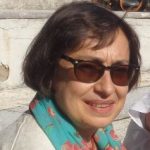 The family institution in Epirus during the 13th century, Athens 1990

Time and ages in the byzantine society. The classification of ages as presented by the hagiographical texts of the middle byzantine period, Athens 1997