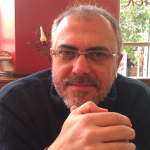 Dimitrios Bosnakis was born in Volos in 1962.

Archaeological Service – Εxcavations: From 1989 to 1990 and later from 1993 to 2009 after he succeed in special exams, he worked as permanent archaeologist at the Greek Archaeological Service of Dodecanese (20th Classical Ephorate), where he conducted dozens of rescue excavations in various islands (Rhodes, Syme, Kos and Kalymnos). As chief of the Archaeological Offices of Kos and Kalymnos he worked for the declaration and protection of archaeological zones on the islands of Kos, Kalymnos and Patmos. He was also scientific supervisor in many restorations projects of monuments of Kos (e.g. Roman Odeion, Casa Romana).

Exhibitions: At the beginning of his career in the Archaeological Service (1994) he participated in the exhibition “The world of Egypt in the National Archaeological Museum”(ed. Dr. Olga Tzahou-Alexandri).
From 2000 to 2008 he was responsible and co-curator for the permanent exhibition of the new Archaeological Museum of Kalymnos.
From 2009 to 2013 he worked at the Archaeological Institute of Aegean Studies (AIAS), especially as curator for the permanent exhibition of “The Epigraphical Collection at Asclepieion of Kos”.
He has also participated in various periodical exhibitions dealing with the archaeology of Kos (Beijing / China, National Archaeological Museum at Athens, Goulandris Museum of Cycladic Art at Athens) as well as co-organizer of local exhibitions with multi-media material or drawings and photographs related with monuments of Kos (Roman Odeion, Asklepieion, Casa Romana) or presenting aspects of public and everyday life in ancient Kos.

Research Interests: His research interests focus: on archaeology of death (in many different fields: burial customs, sculpture, iconography and epigraphy in various historical times), on the study of regional sculpture of Kalymnos (marble statues from a “deposit” near the temple of Apollo Dalios), as well as the on the corpora of inscriptions from Kos and Kalymnos (Inscriptiones Graecae).
Since 2018 in collaboration with the Archaeological Service of Larisa conducts the research project “Krannon” (a systematic excavation at ancient Krannon in Thessaly).

Member of Scientific Societies – Advisory Board of Periodicals: He is correspondant member of the German Archaeological Institute.
He is also member of the advisory board of Greek and foreign scientific periodicals,  Thiasos, Logeion, Ariadne, Tekmeria.