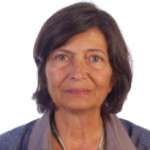 Katerina Kopaka has been an undergraduate and post-graduate student at the University of Paris I (Sorbonne), where she also completed her Ph.D, reading Aegean Prehistory and Protohistory – her doctoral thesis is on House Inner Arrangements and Domestic Activities in Bronze Age Crete and Thera.

She has been teaching at the Department of History & Archaeology of the University of Crete since 1985, and she is today Professor of Prehistoric Archaeology. Her academic interests concern the Bronze Age mainly in the Aegean but also in the wider Mediterranean Sea, and include the following topics: Domestic architecture, Everyday life, people & gender issues, Ancient wine technology, Island cultures, History of Cretan archaeological research (late 19th-early 20th c.).

She has been granted an Alexander von Humboldt fellowship and a bursary from the British School at Athens, and has participated in fieldwork in France, Cyprus, Turkey/Anatolia, and Greece/Crete. On behalf of the University and the Departmnent, she has directed an archaeological survey and coordinated a multi-disciplinary research on the island of Gavdos, off southwestern Crete, where she is at present responsible of the excavation fieldschool at the Bronze Age building complex at the site of Katalymata. Since 2010 she is also leading an archaeological survey on the island of Dia, opposite the city and harbour of Iraklion.