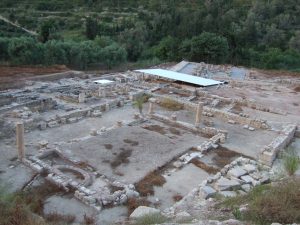 The University of Crete excavations in Sector I at Ancient Eleutherna have been conducted since 1985 under Petros Themelis, Professor of Classical Archaeology, yielding the following results:

One of the central neighbourhoods in the city has been uncovered, including two Roman bathhouse complexes, two large Pompeii-type urban mansions, a public building and a house of worship superseded by the Episcopal Basilica of Bishop Euphratas in the first half of the 5th century AD. The above buildings lay within the town plan, which developed following the features of the semi-mountainous environment, i.e. not according to regulatory or geometric planning.

The movable finds deriving from the above buildings are of particular significance over the period from the 3rd century BC to the 7th century AD, both in relation to the city of Eleutherna and to the entire island of Crete. The definitively dated destruction layers constitute a further significant feature; the first marks the end of the Roman period and the proven earthquake of 365/7 AD, while the second denotes the end of the Early Byzantine period during the reign of Constans II (641-668 AD).

The site was particularly rich in ceramic finds related to the two aforementioned main periods in the city life. The same holds true of coins, which make an important contribution to the precise dating of periods of life and destruction. Among remaining movable finds, mention should be made of inscriptions, totaling more than fifty in number; sculptures, impressive in terms of both quality and number; metal artifacts and utensils; glass vessels; figurines and ivory artifacts. The last group are worth special mention on account of their being quite literally unique 4th century finds; in combination with all of the above, they testify to the general economic power and prosperity of Ancient Eleutherna up until late antiquity.