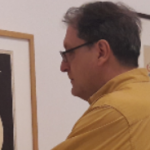 Dr. Matthiopoulos received his Bachelor of Arts in Painting from the A.S.F.A. (1977-1983) and continued his graduate studies in Art History (D.E.A., 1985) and in Philosophy of Art (D.E.A., 1987) at the Sorbonne, Paris I – Panthéon. In 1997, he completed his Ph.D. in Art History at the Department of History and Archaeology, School of Philosophy, University of Crete.

Since 1998, he has been teaching History of Art at the Department of History and Archaeology, University of Crete.

From 2001 to present: Ηe participates as researcher at the Institute of Mediterranean Studies – FORTH.

From 2012 to 2018, he has been a Member of the Scientific Council, Institute of Mediterranean Studies – FORTH.

From 2016 to 2019, he has served as President of the Association of Greek Art Historians.

From 2017 to 2019, he has been a Member of the Administrative Board of the National Museum of Contemporary Art (EMST).

From 2003 to 2011: Ηe participates as researcher at the Benaki Museum.

His research interests are in art history issues of the 19th and 20th century; more specifically in exploring the role played by the Greek State and other administrative bodies in the arts, as well as the various mechanisms formed for the wider assimilation of Modernist Art in Greece, as they are recorded in the fields of ideology, aesthetic perceptions, art theory and art criticism.

He is the author of 7 published books, and also editor or co-editor of 6 volumes. In addition, he has contributed essays and articles in more than 40 collaborative editions, exhibition catalogues, conference proceedings and art periodicals.